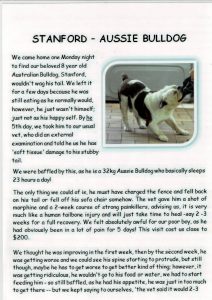 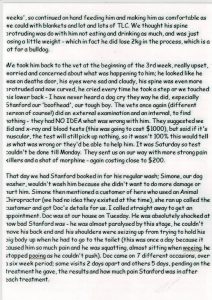 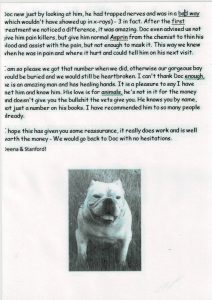 We came home one Monday night to find our beloved 8 year old Australian Bulldog, Standford, wouldn’t wag his tail. We left it for a few days because he was still eating as he normally would, however, he just wasn’t himself; just not as his happy self. By the 5th day, we took him to our usual vet, who did an external examination and told us he has ‘soft tissue’ damage to his stubby tail.

We were baffled by this, as he is a 32kg Aussie Bulldog who basically sleeps 23 hours a day!

The only thing we could think of is, he must have charged the fence and fell back on his tail or fell off his sofa chair somehow. The vet gave him a shot of morphine and a 2-week course of strong painkillers, advising us, it is very much like a human tailbone injury and will just take time to heal -say 2 -3 weeks for a full recovery. We felt absolutely awful for our poor boy, as he had obviously been in a lot of pain for 5 days! This visit cost us close to $200.

We thought he was improving in the first week, then by the second week, he was getting worse and we could see his spine starting to protrude, but still though, maybe he has to get worse to get better kind of thing; however, it was getting ridiculous, he wouldn’t go to his food or water, we had to start feeding him – so still baffled, as he had his appetite, he was just in too much pain to get there — but we kept saying to ourselves, ‘the vet said it would take 2-3 weeks’, so continued on hand feeing him and making him as comfortable as we could with blankets and lots and lots of TLC. We thought his spine protruding was to do with him not eating and drinking as much, and was just losing a little weight – which in fact he did lose 2kg in the process, which is a log for a bulldog.

We took him back to the vet at the beginning of the 3rd week, really upset, worried and concerned about what was happening to him; he looked like he was on death’s door, his eyes were sad and cloudy, his spine was even more protruded and now curved, he cried every time he to a step or we touched his lower back – I have never heard a dog cry the way he did, especially Stanford our ‘boofhead’, our tough boy. The vets once again (different person of course!) did an external examination and an internal, to find nothing – they had NO IDEA what was wrong with him. They suggested we did an X-ray and blood tests (this was going to cost $1000), but said if it’s muscular, the test will still pick up nothing, so it wasn’t 100% this would tell us what was wrong or they’d be able to help him. It was Saturday so test couldn’t be done till Monday. They sent us on our way with more strong pain killers and a shot of morphine – again costing close to $200.

That day we had Stanford booked in for his regular wash; Simone our dog washer, wouldn’t wash him because she didn’t want to do more damage or hurt him. Simone then mentioned a customer of hers who used an Animal Chiropractor (we had no idea they existed at the time), she ran up called the customer and got

‘s details for us. I called straight away to get an appointment.

was at our house on Tuesday. He was absolutely shocked at how bad Stanford was – he was almost paralysed by this stage, he couldn’t move his back end and his shoulders were seizing up from trying to hold his big body up when he had to go to the toilet (this was once a day because it caused him so much pain and he was squatting, almost sitting when weeing, he stopped pooing as he couldn’t push).

came on 7 different occasions, over a six week period; some visits 2 days apart and others 5 days, depending on the treatment he gave, the results and how much pain Stanford was in after each treatment.

knew just by looking at him, he had trapped nerves and was in a bad way (which wouldn’t have showed up in X-rays – 3 in fact). After the first treatment we noticed a difference, it was amazing.

even advised us not to give him pain killers, but give him normal Aspirin from the chemist to thin his blood and assist with the pain, but not enough to mask it. This way we knew when he was in pain and where it hurt and could tell him on his next visit.

I am so pleased we got that number when we did, otherwise our gorgeous boy would be buried and we would still be heartbroken.  I can’t thank

enough, he is an amazing man and has healing hands. It is a pleasure to say I have met him and know him. His love is for animals, he’s not in it for the money and doesn’t give you the bullshit the vets give you. He knows you by name, not just a number on his books. I have recommended him to so many people already.

I hope this has given you some reassurance, it really does work and is well worth the money – We would go back to

If your animal is showing signs of restricted movement, lameness, or any change in behaviour that has you concerned get in touch with K9DogMan today.
Book K9DogMan for a visit