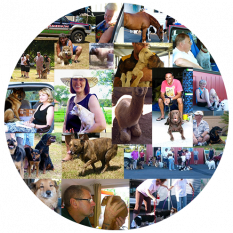 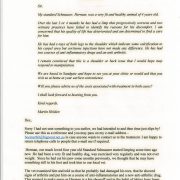 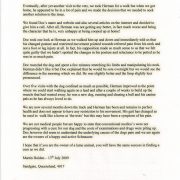 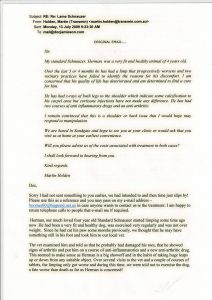 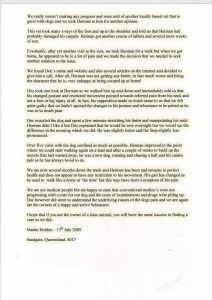 Subject: RE: Re: Lame Schnauzer

My standard Schnauzer, Herman, was a very fit and healthy animal of 4 years old.

Over the last 3 or 4 months he has had a limp that progressively worsens and two veterinary practices have failed to identify the reasons for his discomfort. I am concerned that his quality of life has deteriorated and am determined to find a cure for him.

He has had X-rays of both legs to the shoulder which indicate some calcification to his carpel area but cortisone injections have not made any difference. He has had two courses of anti inflammatory drugs and an anti-arthritic.

I remain convinced that this is a shoulder or a back issue that I would hope may respond to manipulation.

We are based in Sandgate and hope to see you at your clinic or would ask that you visit us at home at your earliest convenience.

Will you please advise us of the costs associated with treatment in both cases?

I shall look forward to hearing from you.

Sorry I had not sent something to you earlier, we had intended to and the time just slips by! Please use this as a reference and you may pass on my e-mail address – boomer60@bigpond.net.au in case anyone wants to contact us re the treatment. I am happy to return telephone calls to people that e-mail me if required.

Herman, our much loved four year old Standard Schnauzer started limping some time ago now. He had been a very fit and healthy dog, was exercised very regularly and was not over weight. Since he had cut his paw some months previously, we thought that he may have something still in his foot and took him to our local vet.

The vet examined him and told us that he probably had damaged his toes, that he showed signs of arthritis and put him on a course of anti-inflammatories and a new anti-arthritic drug. This seemed to make sense as Herman is a big show off and in the habit of taking huge leaps up or down from any suitable object. Over several visits to the vet and a couple of courses of tablets, the limping only got worse and during this time, we were told not to exercise the dog, a fate worse than death as far as Herman is concerned!

We really weren’t making any progress and were told of another locally based vet that is good with dogs and we took Herman to him for another opinion.

This vet took many X-rays of the foot and up to the shoulder and told us that Herman had probably damaged his carpels. Herman got another course of tablets and several more weeks of rest.

Eventually, after yet another visit to the vets, we took Herman for a walk but when we got home, he appeared to be in a lot of pain and we made the decision that we needed to seek another solution to the issue.

We found Doc’s name and website and also several articles on the internet and decided to give him a call. After all, Herman was not getting any better, in fact much worse and being the character that he is, very unhappy at being cooped up at home!

Doc took one look at Herman as we walked him up and down and immediately told us that his changed posture and restricted movement pointed towards referred pain from his neck and not a foot or leg injury at all. In fact, his supposition made so much sense to us that we felt quite guilty that we hadn’t spotted the changes in his posture and reluctance to be petted as he was in so much pain.

Doc muzzled the dog and spent a few minutes stretching his limbs and manipulating his neck. Herman didn’t like it but Doc explained that he would be sore overnight but we would see the difference in the morning which we did. He was slightly better and the limp slightly less pronounced.

Over five visits with the dog confined as much as possible, Herman improved to the point where we could start walking again on a lead and after a couple of weeks to build up the muscle that had wasted away, he was a new dog, running and chasing a ball and his canine pals as he has always loved to do.

We are now several months down the track and Herman has been and remains in perfect health and does not appear to have any restriction to his movement. His gait has changed as he used to walk like a horse at ‘the trots’ but this may have been a symptom of his pain.

We are not medical people but are happy to state that conventional medico’s were not progressing with a cure for our dog and the costs of examinations and drugs were piling up. Doc however did seem to understand the underlying causes of the dogs pain and we are again are the happy owners of a happy and active Schnauzer.

I hope that if you are the owner of a lame animal, you will have the same success in finding a cure as we did. 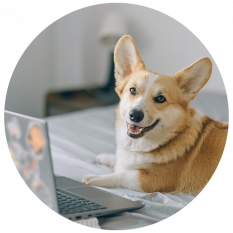